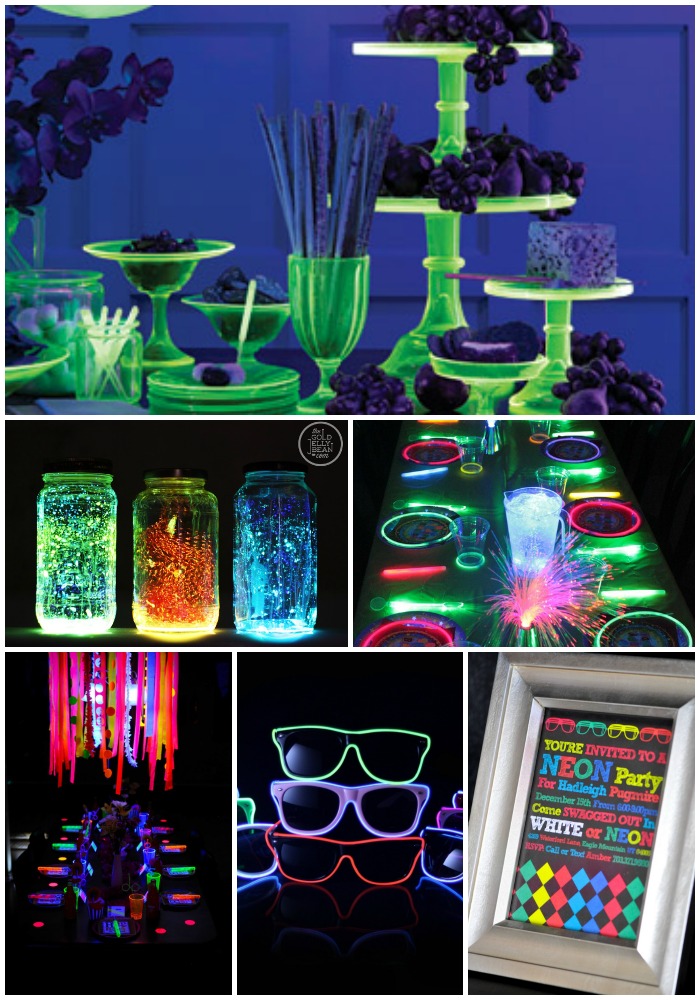 We are SUPER excited about today’s Sweet 16 idea, a glow in the dark party! From seeing the huge trend in neon this past year with everything from clothes to shoes, home decor, even weddings,  we KNEW this would be a killer party theme too. Kicking the neon theme up a notch with a glow in the dark neon party is an even lovelier idea! We are just smitten for this idea. Everything gets better when it is glow in the dark like bowling, miniature golf, 5 K marathons and parties are no exception! A glow in the dark party is an awesome idea for a sweet 16 or really any occasion for that matter because of how funky and cool everything is.  You really can’t get any cooler than glow In the dark invitations, decorations, food and awesome neon outfits for a party. Not to mention how awesome it is to use glow sticks and glow in the dark paint in almost every party detail imaginable. Our minds are just buzzing with ideas! We have rounded up our favorite neon glow in the dark party ideas and can’t wait to show yo how cool this party can be!

Neon, Glow In The Dark Party 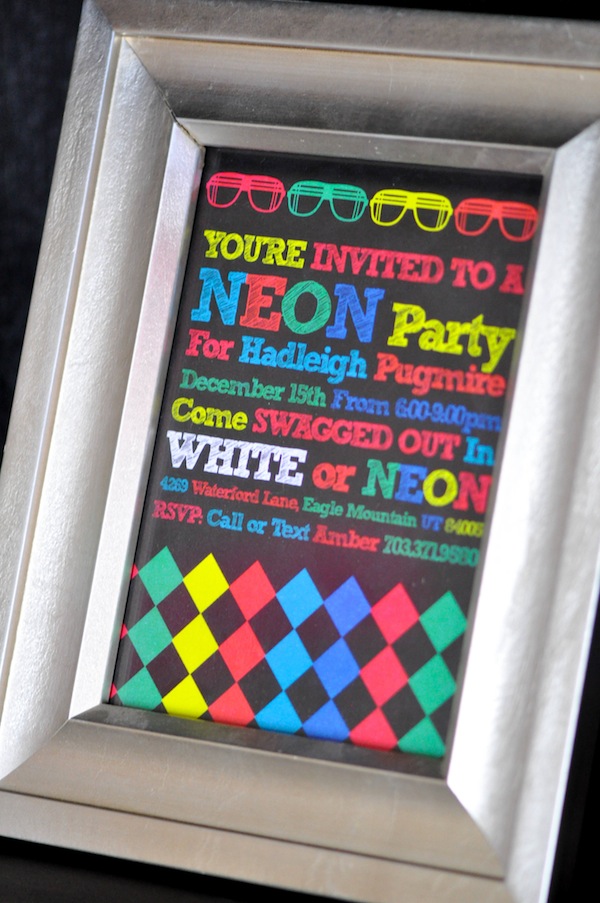 {We ADORE this glow in the dark party invitation that they used as a party sign on Kara’s Party Ideas! Isn’t it just lovely?} 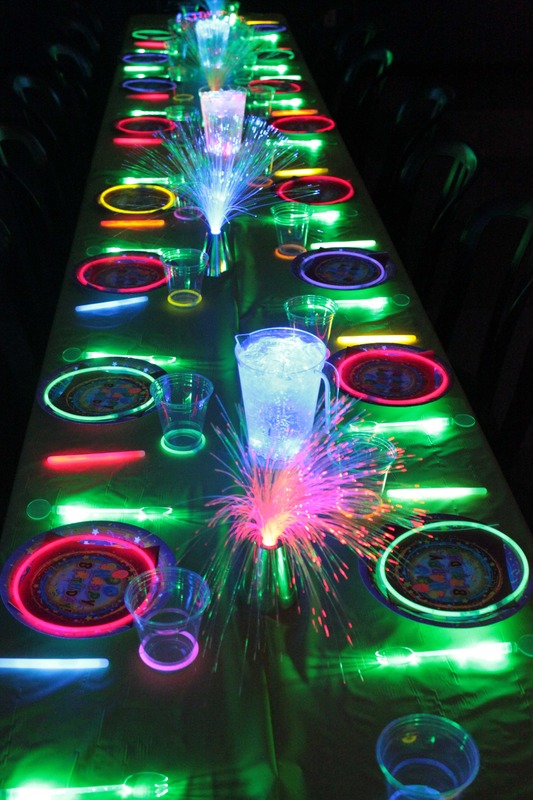 {Look how many ways you can use glow sticks! On plates, cups, even utensils and pitchers! We love this glow int he dark party table set up on Party Wirks.} 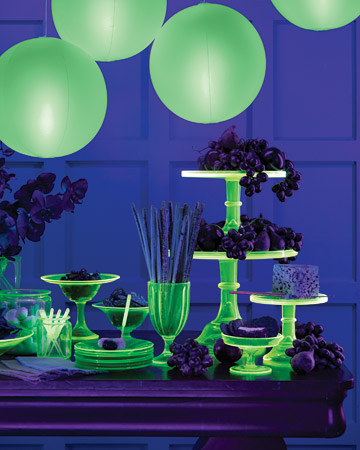 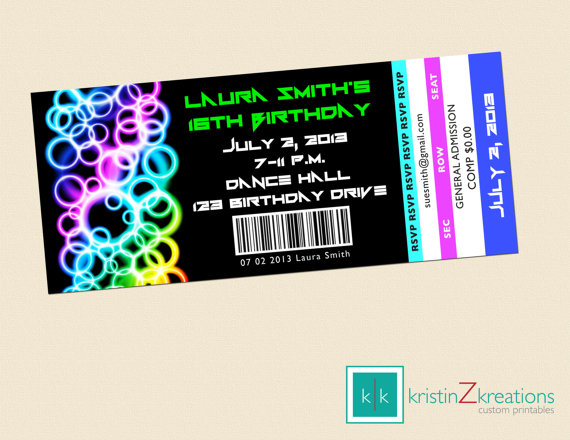 {This glow in the dark party invitation is just awesome for a Sweet 16!  We love the ticket design and all of the beautiful colors. Get this invitations from Kristin Z Kreations on Etsy.} 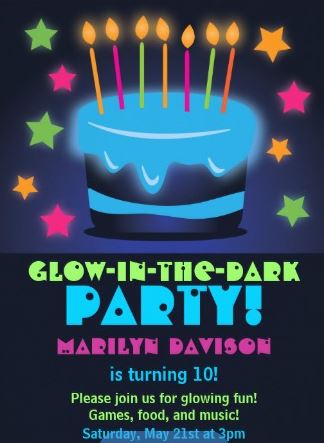 {The neon colors on this glow int he dark party invitation are just awesome! Get this invitation from Zazzle.} 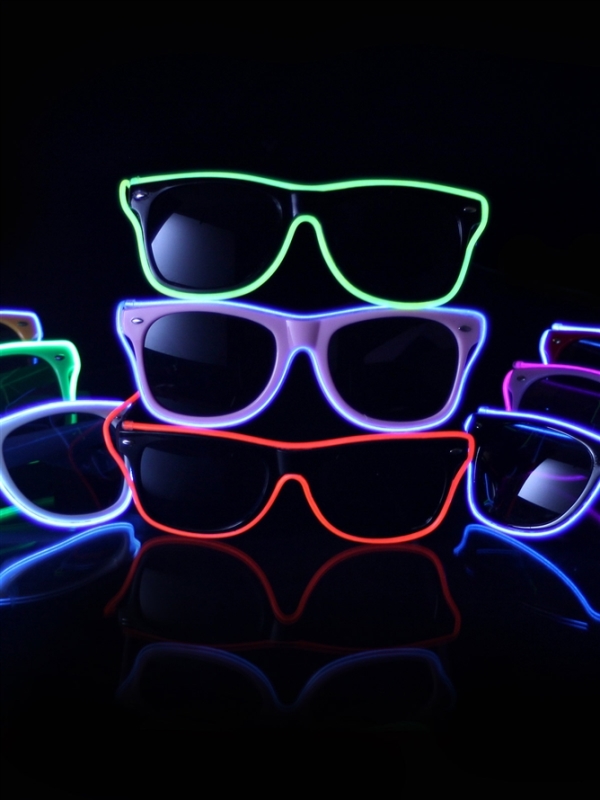 {This light up sunglasses are such an AMAZING idea for a glow in the dark party. These make for awesome outfits during the party and favors! Get these from Rave Ready.} 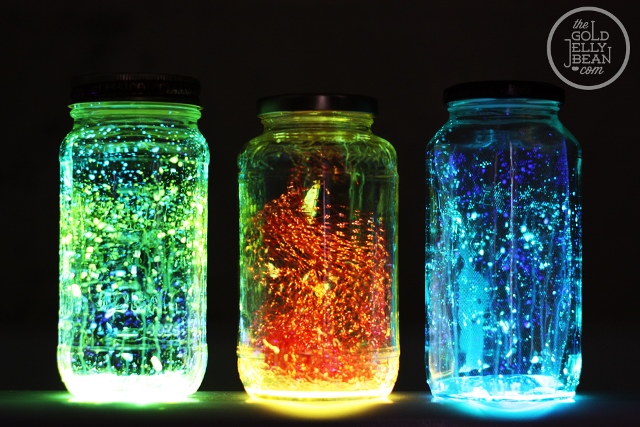 {We love glow stick decorations and these DIY ones from The Gold Jelly Bean are just too lovely!} 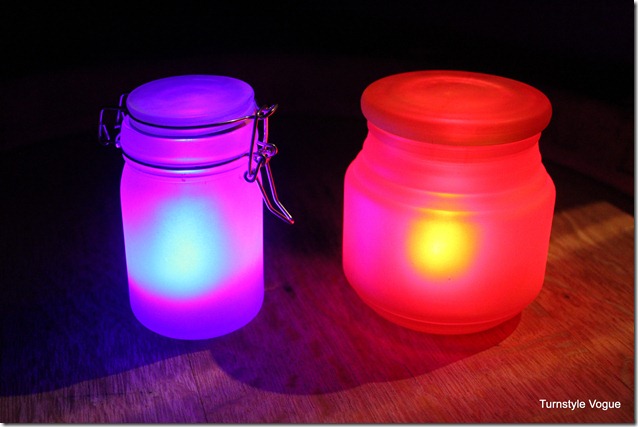 {Speaking of glow stick decorations, aren’t these glowing jars just fabulous from Turnstyle Vogue? Such an easy and amazing idea for a glow in the dark Sweet 16!} 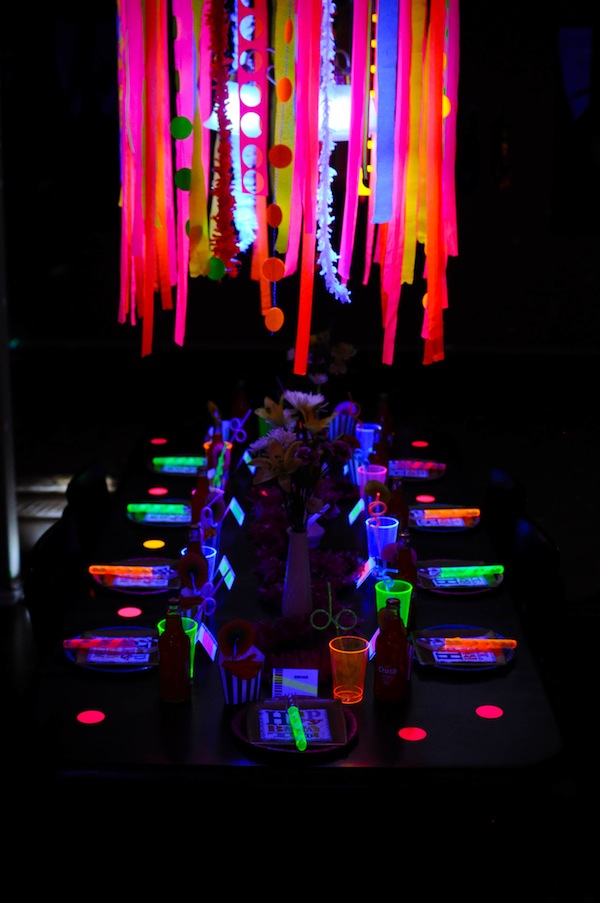 {Things always look so cool when they are under black light and these cups and ribbons really make a statement! We adore this glow in the dark party table on Kara Party Ideas.}

{These glow pumpkins that we spotted on Cuded would be so fun to have at a glow in the dark party!} 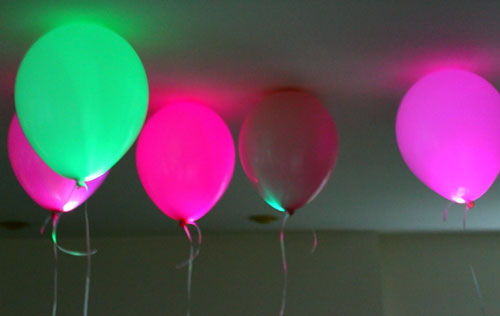 {Put LED’s or glow sticks in your balloons to make them glow. We are just gaga over this simple yet awesome idea for a glow in the dark party. Get the kit from Brit + Co.} 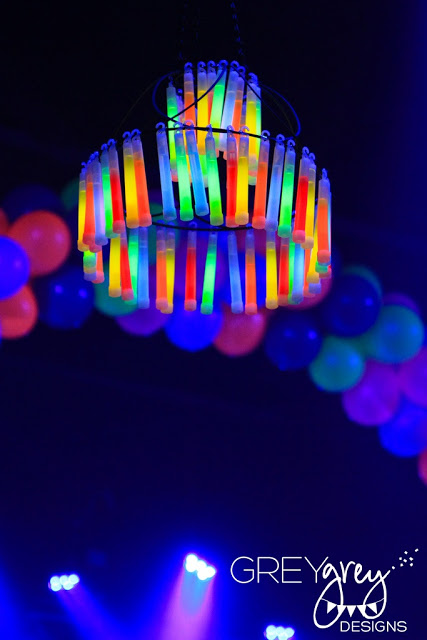 {An AWESOME glow stick chandelier that you can easily make from Grey Grey Designs. You could literally hang this anywhere and make a statement!} 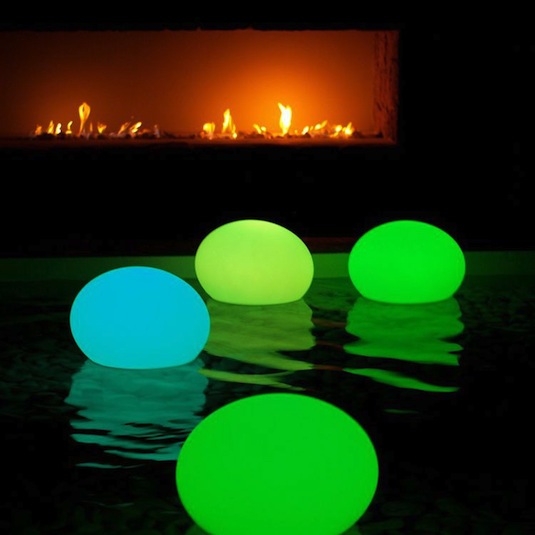 {Float balloon with glow sticks or glowing orbs in water to really make an wow moment at your glow int he dark party! Get floating glowing orbs from Save On Crafts. Spotted these orbs on Listotic.} 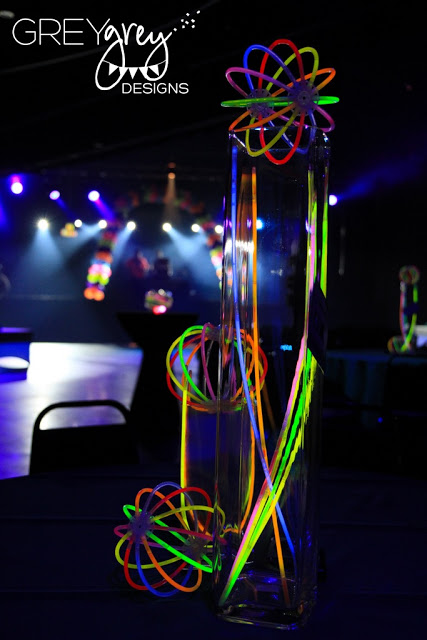 {Oh my goodness, these glow stick centerpieces are outstanding! Such a lovely look from Grey Grey Designs!} 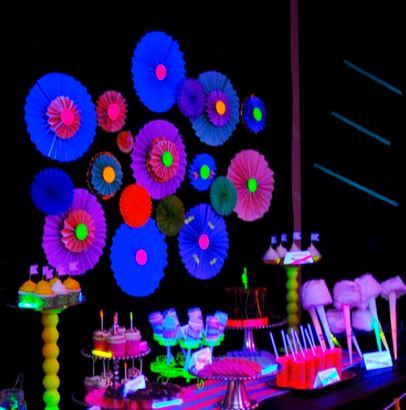 {Now time for the desserts and this glow in the dark dessert bar on Kara’s Party Ideas is seriously lovely. We love all of the glowing decor and treats!} 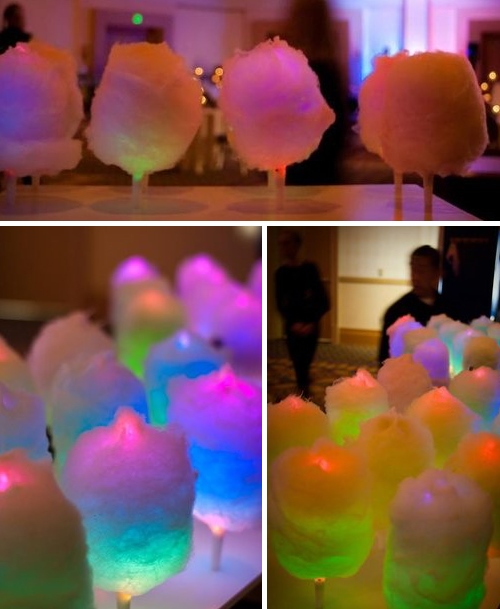 Need a place to get glow in the dark supplies for your party? Check Out Glow Source! They have 10% off your first purchase right now!

Bright Ideas For A Neon Glow In The Dark Party! was last modified: October 24th, 2016 by Emily Miller